It is exactly five months since we revealed the “Opportunity of this decade” to our premium users. It jumped higher more than 100% since then. And that’s just the beginning. We expect returns of hundreds of percent more over the next few years.

In fact, it’s not just a single opportunity, but two opportunities. Today, we will reveal them to all of you. Of course, our premium users had a 5-month and more than 100% advantage.

The first opportunity was Canadian energy companies which is best represented by the S&P/TSX Capped Energy index. 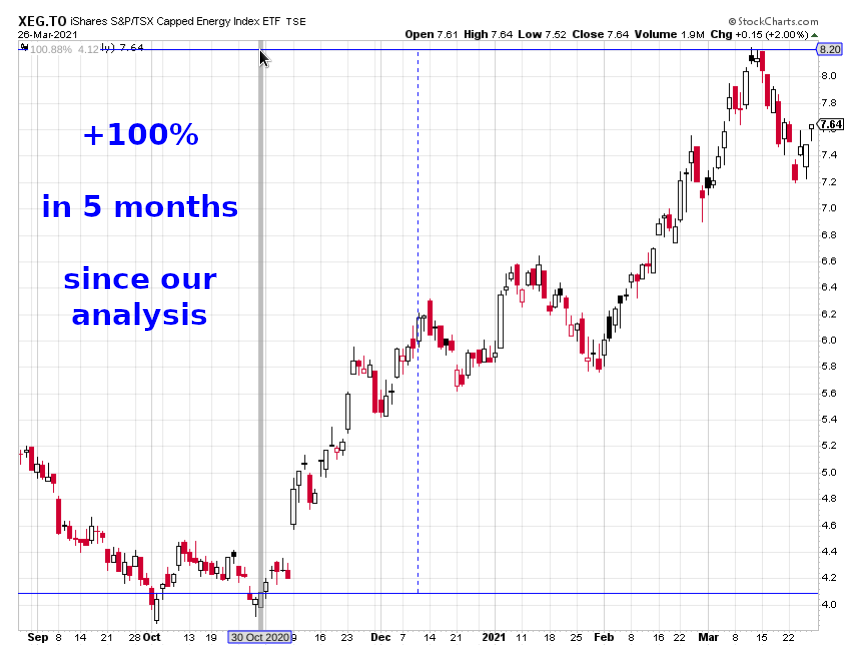 The second opportunity was natural gas. And by natural gas, I don’t mean the commodity itself, but rather the companies in the exploration, production and midstream business. There is a well-known First trust Natural gas ETF that represents these stocks. 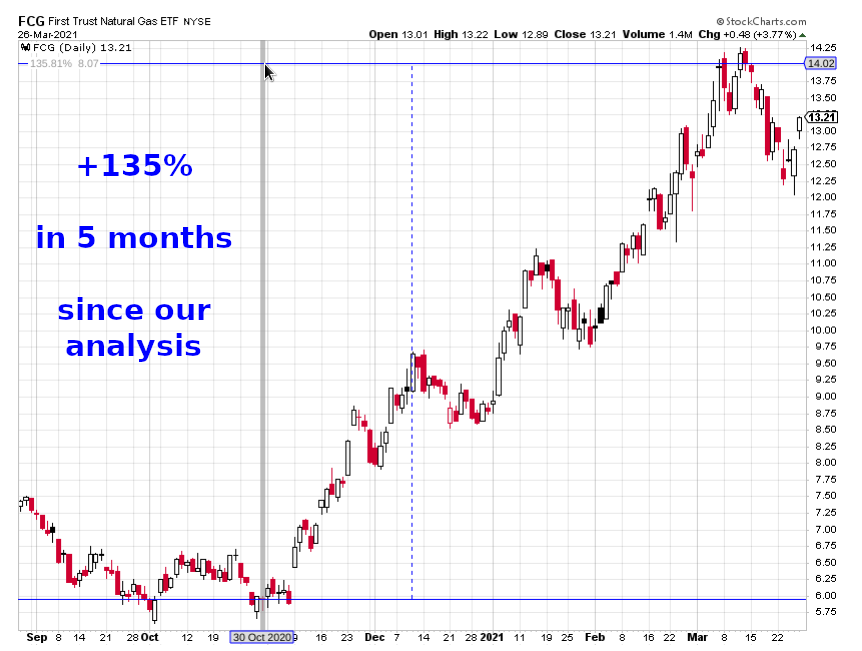 You might wonder why we considered these two markets to be so great? Instead of a long explanation, we decided to release our original research video from October 30th for free. It contains valuable information due to the long-term potential of this opportunity.

Such opportunities are scarce. Of course, many markets become heavily oversold or overbought over time and present a good opportunity. This is quite common. The problem is, very few of these situations turn into a great opportunity. You need an irrefutable fundamental tailwind that will push the asset into a multiyear bull market. These fundamental catalysts are obvious in retrospect but very hard to recognize at present.

Fast forward to this day, you might wonder what’s the remaining potential of this opportunity. Well, it’s important to distinguish between the different time frames. I’m still convinced these assets have hundreds of percent more upside in the long term. The main reason is the divergence between the oil price and the upstream companies valuations. While their future expected cash flow has increased immensely with the rising oil price, the impact on their stock price has been more muted. Most of these stocks are trading considerably cheaper compared to the similar oil price in the past. In other words, there is room for multiples expansion. This will become obvious once the capex destruction and underinvestment from the previous years runs into the COVID recovery and rising energy demand from emerging markets.

On the other hand, there can be headwinds in the short term. In fact, this became obvious during March and we warned you in advance on our twitter.

Near spreads in #CrudeOil continue to weaken. Unless they swiftly realign with the underlying price, the uptrend in crude oil is unsustainable (in the short term).#OOTT #CL_F $USO $BNO pic.twitter.com/gJNwg3VJne

What’s the cause of this weakness? Mainly the weak demand on the physical market. While the USA and UK’s vaccination campaign is running smoothly, the same can’t be said about Europe. Most of the EU states, including my home country, are still under strict lockdown. An even worse situation is in less developed countries around the world that couldn’t secure enough vaccines through expensive agreements with the pharma companies. Unless the virus mutates in an even more significant way, these obstacles are rather temporary. Moreover, the upcoming summer in the northern hemisphere will probably slow the spread of the virus. Nevertheless, the situation will remain difficult for several weeks before it gets materially better.

Another source of weakness is the reduced buying appetite from China. It snapped large volumes of cheap crude last year to its strategic petroleum reserves. Therefore, they’re not forced to buy the expensive oil right now. At least not till many refineries undergo maintenance which should extend well into April.

Of course, we have the Suez canal blockade, but its impact is more severe on the flow of goods rather than crude oil. The Eilat-Ashkelon pipeline might help reduce this bottleneck on the flow of crude to Europe (products are more constrained).

In conclusion, the short-term weakness can persist for weeks before the fundamentals improve. We recommend following the spreads as a good indicator of the health of the physical markets. We periodically comment about their development on our twitter. But keep in mind the energy equities don’t have to react to the fall in crude oil the same way they did last year. There is little doubt energy has entered a new bull market and weaknesses are most likely long-term buying opportunities.

As you can see, it truly pays off to follow our premium research.