Trading grains in the current environment

Given the current uncertainty in general markets (VIX is above 21 right now), it seems wise to escape into some uncorrelated assets. Grains fit this criterion quite well, given their low correlation with major asset classes like stocks or bonds. I’ll focus on corn and soybeans because I don’t trade wheat regularly (I have nothing against wheat, it’s just a matter of preference).

Both corn and soybeans, the two largest crops in the US, have been in a downtrend for some time. This is clearly visible by looking at the 5-year continuous futures charts: 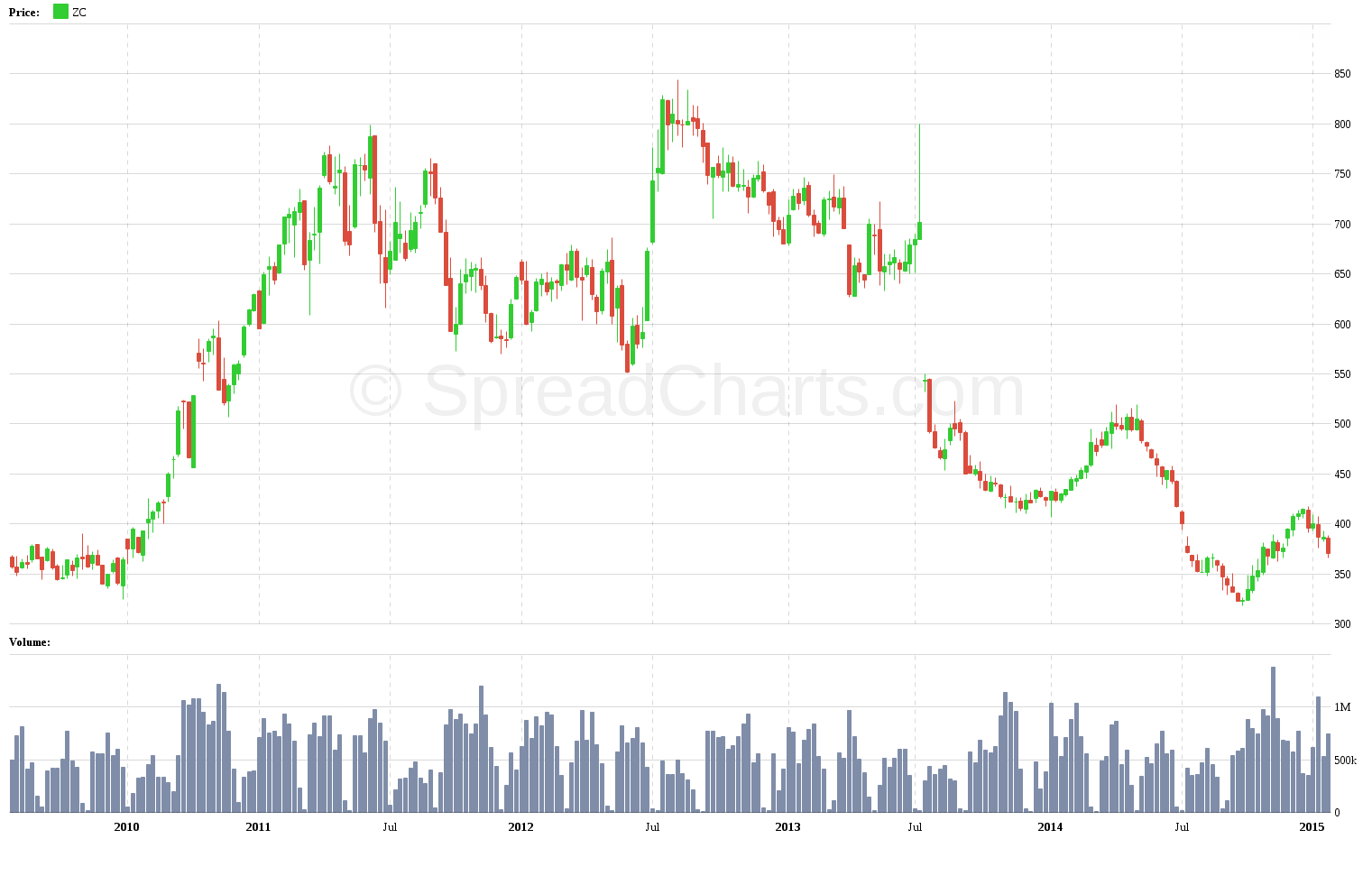 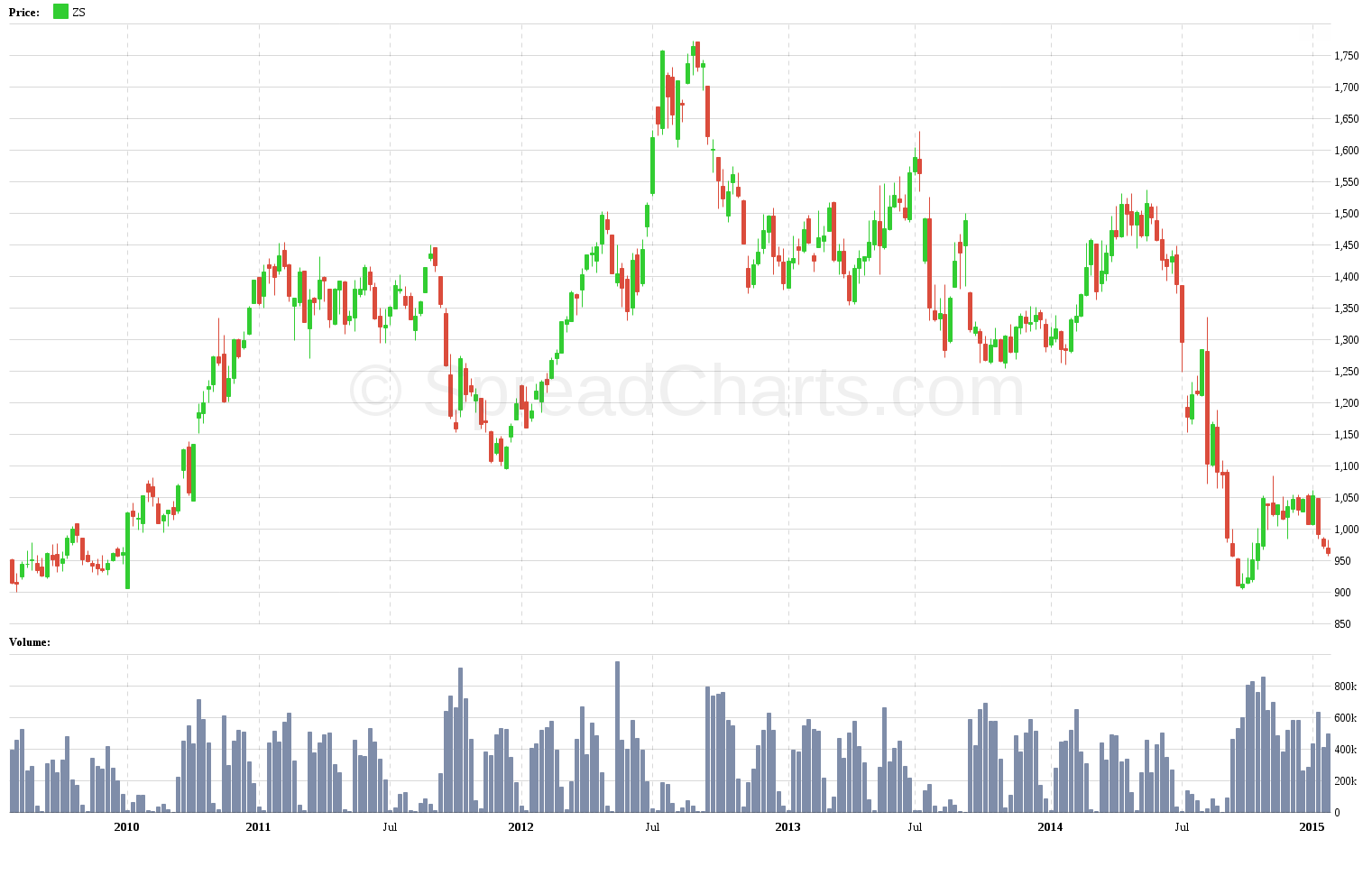 Can we just say the grains are oversold and start looking for long entry? Well, that may be true from the short-term perspective. But what if the bear market is here to stay for a few more years? There are many permabulls in agriculture, such as Jim Rogers. However, some market professionals are more cautious. One of them is Ed Usset from University of Minnesota, whom I hold in high regard. Read his article about long term outlook.

So how would I play this market? Going long for the long term is risky because I’d have to pick the exact bottom. I’d need the price to rise. If the price just stops falling, I would be bleeding money on contango. Look at sugar for example. I know a few people who are long sugar ETF (SGG) and lost tons of money, despite the front future price moving sideways for a year and a half. Nevertheless, if I would have a different opinion and want to go long, I would choose soybeans instead of corn as it usually has a more favorable term structure.

Personally, I’d skip the outright futures entirely and use the contango for our benefit. I would consider the interdelivery spread in corn, ZCN16-ZCZ15: 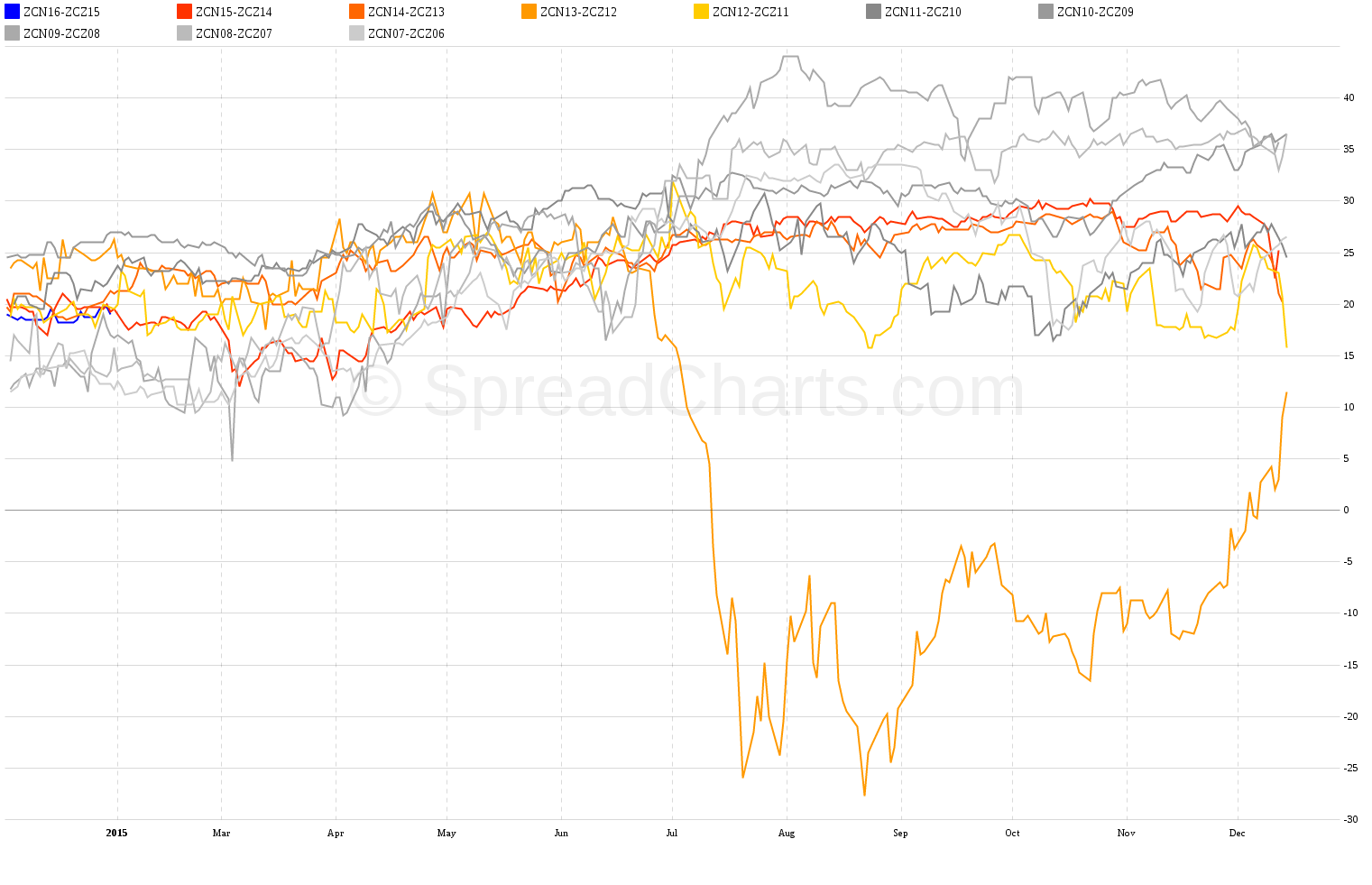 This spread is very conservative because it’s within the same crop. It’s also safe because it’s in the new crop, which is still in the ground (protected by snow cover). Nobody can say yet whether the new crop will be good or bad. The spread can become risky at the start of summer because that’s the time when weather can adversely affect the new crop. That happened in 2012 as you can see in the chart above. If we remove that year, you can see the nice seasonal influence: 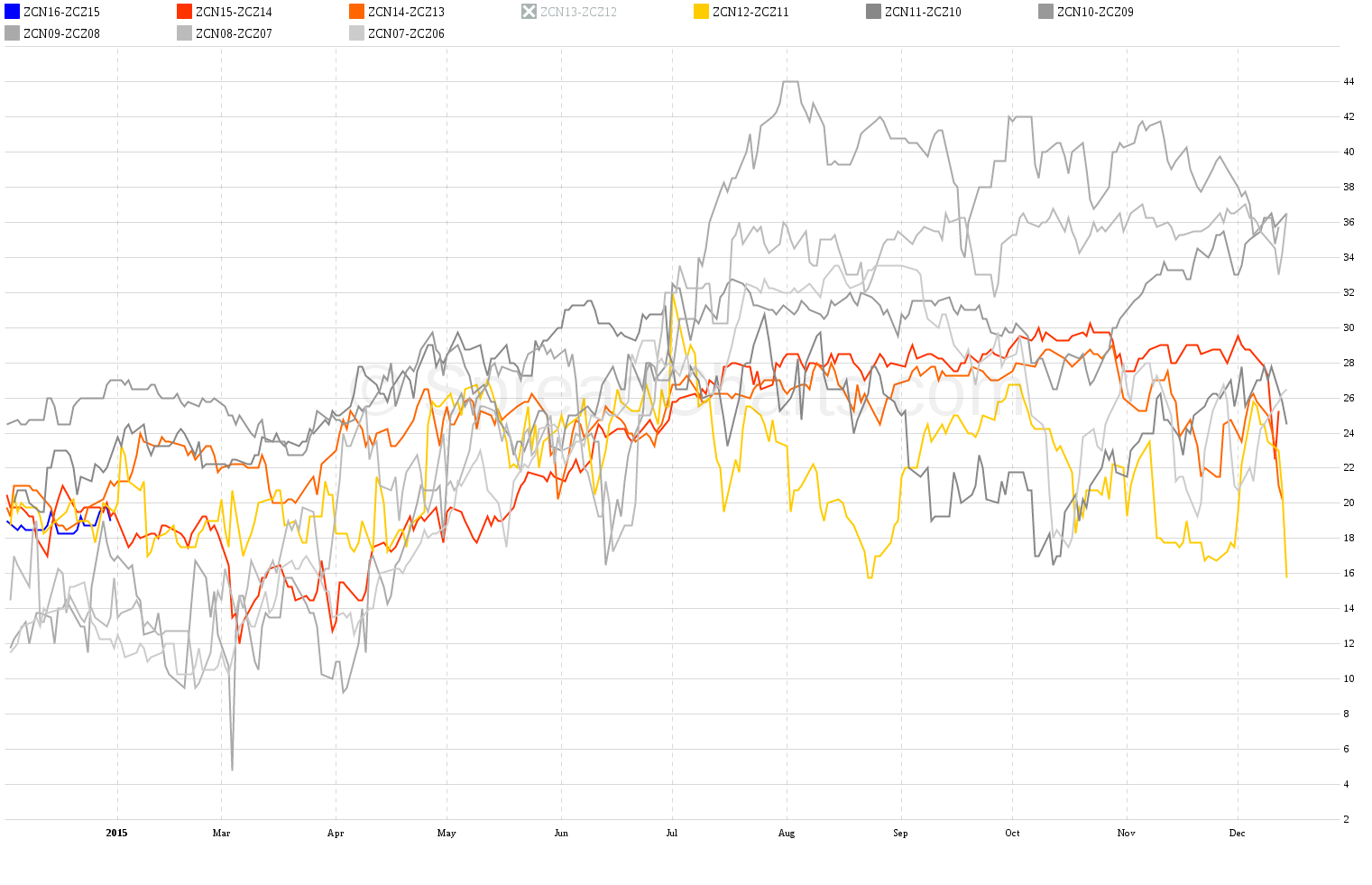 But don’t forget to get out in time! When I zoom the area, there is clearly visible money to be made in this spread, even if you stay just a few months: 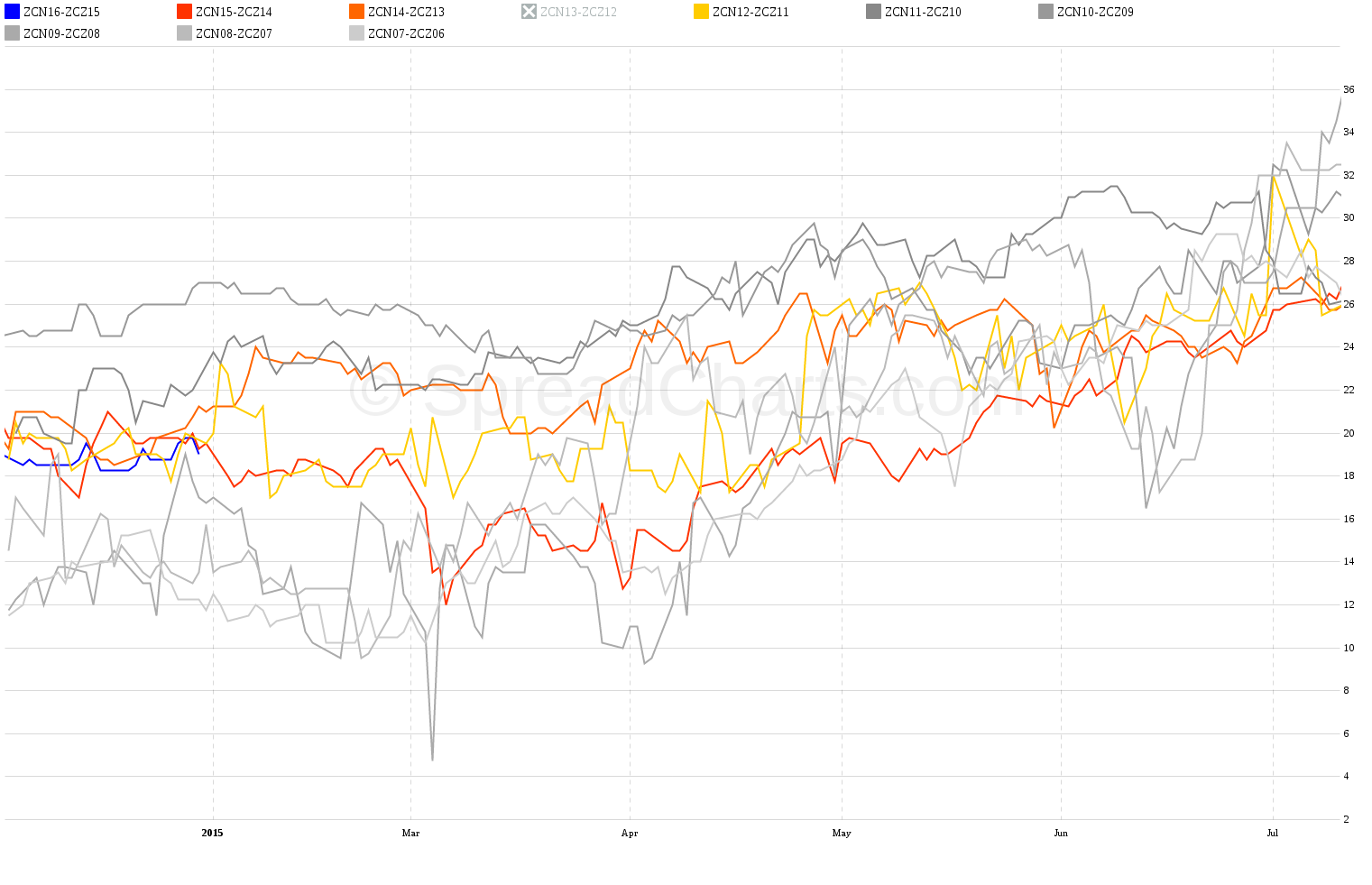 I traded this spread regularly when I was an individual trader and never lost money in it! However, I didn’t just blindly go in and out based on seasonality. I used strict rules for timing entries and exits that helped me to achieve higher profits and reduce risk (and also avoid the slump in 2012). This spread has only one disadvantage and that is lower liquidity of its long side (ZCN16). As long as you won’t trade it with millions, you should be OK. Just keep it in mind and watch the volume.