It’s the beginning of the year, and here comes my traditional gold market forecast.

First, I’d like to evaluate last year’s outlook. At the time of its writing (January 2015), the price of gold was $1300. The precious metals had been rising back then and many people started to talk about the beginning of the new bull market. I had the opposite opinion. I believed that gold was to remain in a bear market and would end 2015 in the red. And this is what eventually happened. I particularly pointed to the price level of $1000 which the price approached at the end of the year and finished $50 above it. 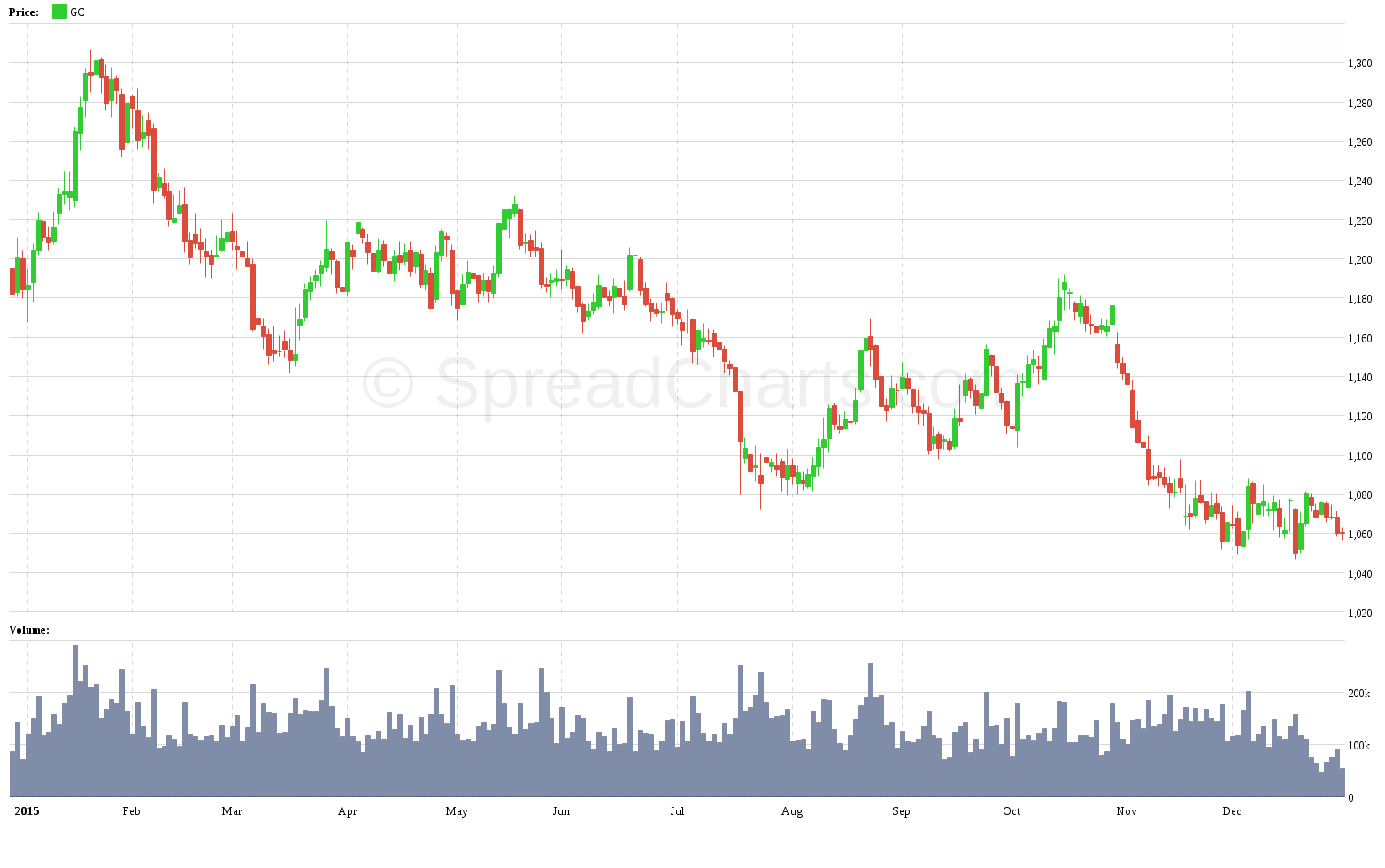 But what can we expect from gold in 2016? I think that at the beginning of 2016 gold will see strong growth in price. The primary reason is a very favorable situation in terms of the analysis of the Commitments of Traders. This shows clearly oversold conditions. I won’t delve into explaining what the COT is and how to interpret it now. 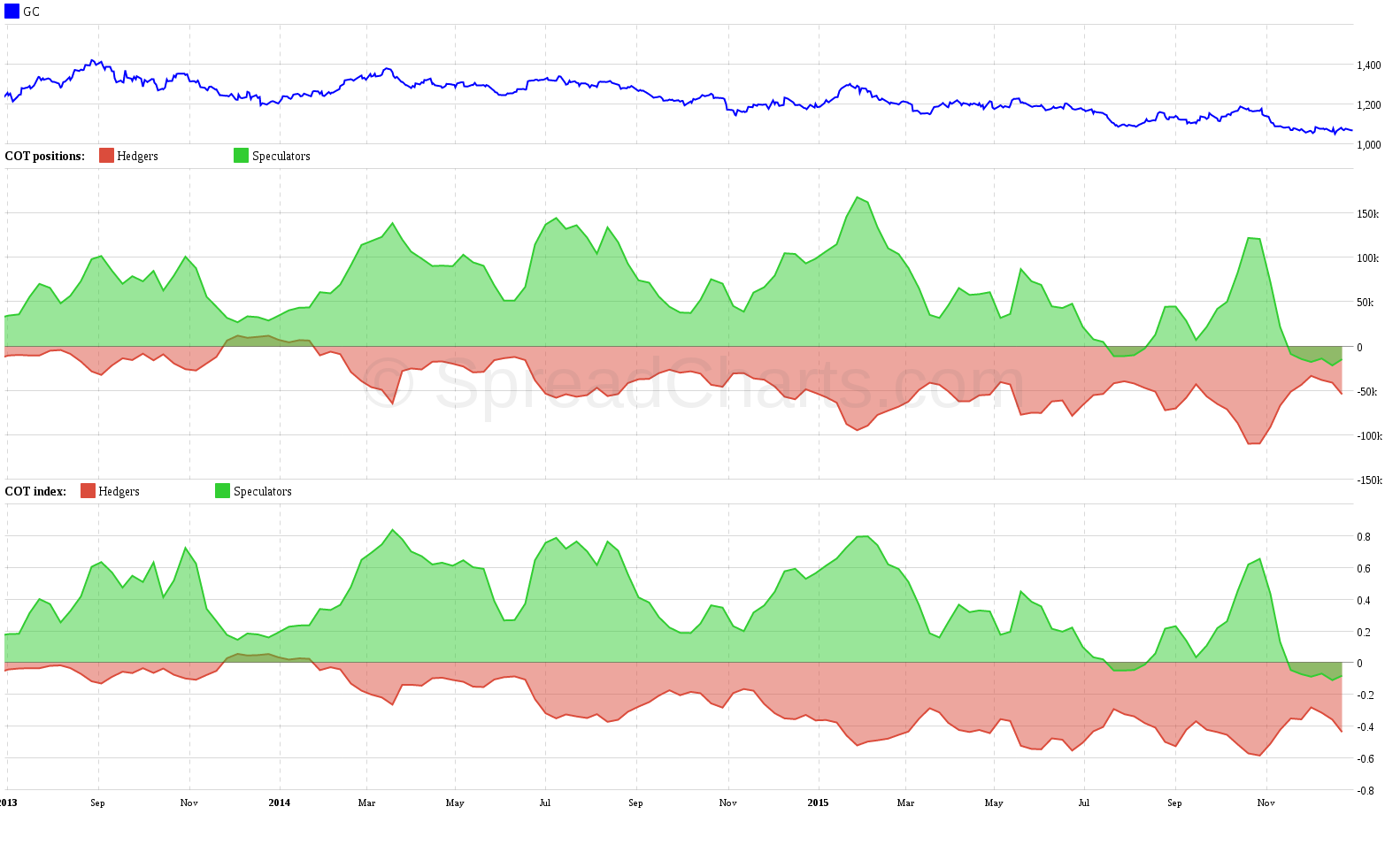 Another supporting factor for gold is seasonality. The beginning of the year is often associated with an increase in price. This is supported by the relatively low price lately, which makes gold attractive for long-term buyers. In recent months gold has been showing fair seasonal behaviour. 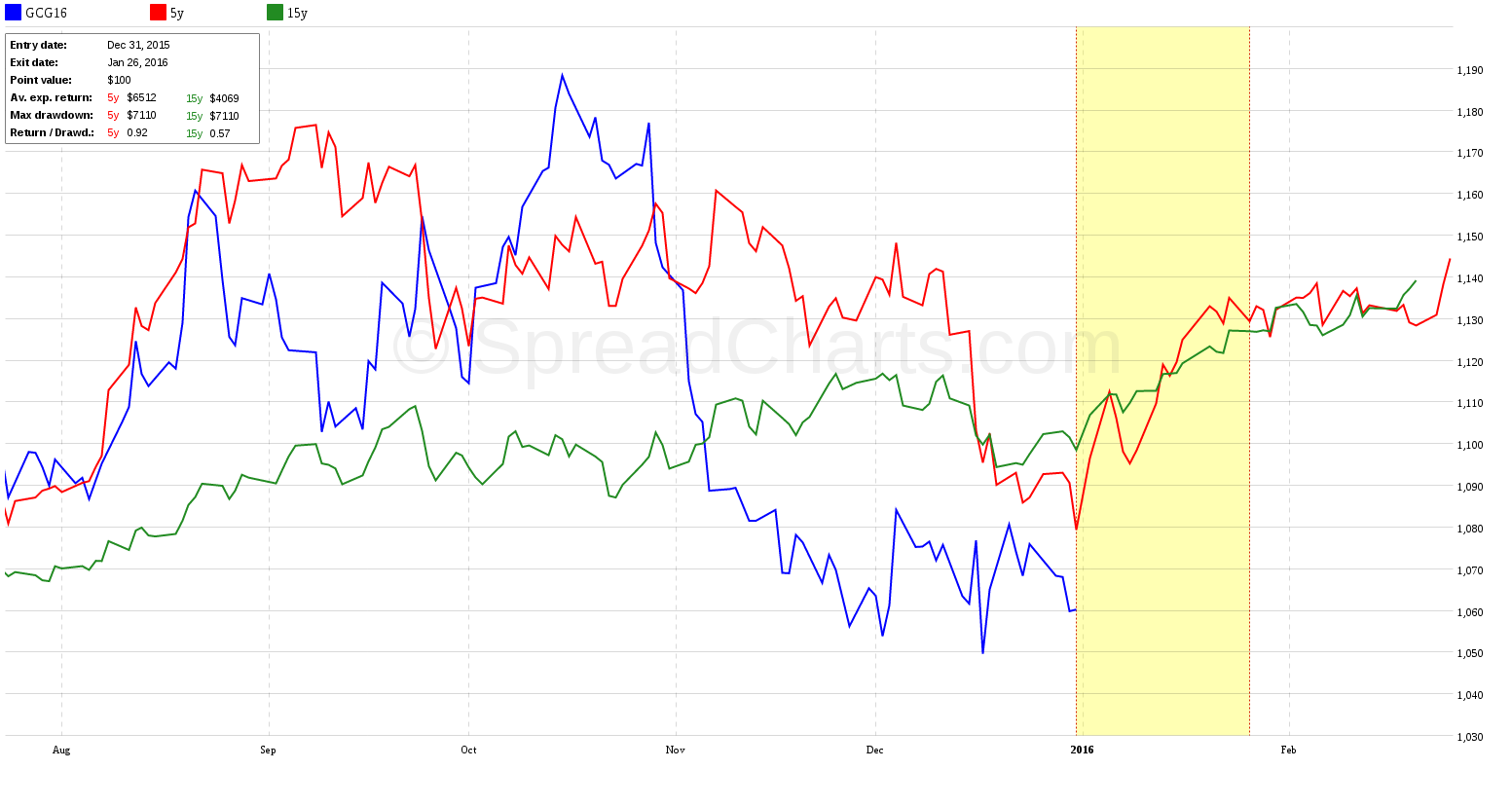 That was the short-term outlook. But what about medium to long term? I think the price will eventually run into one of two strong resistance levels (see the following chart). 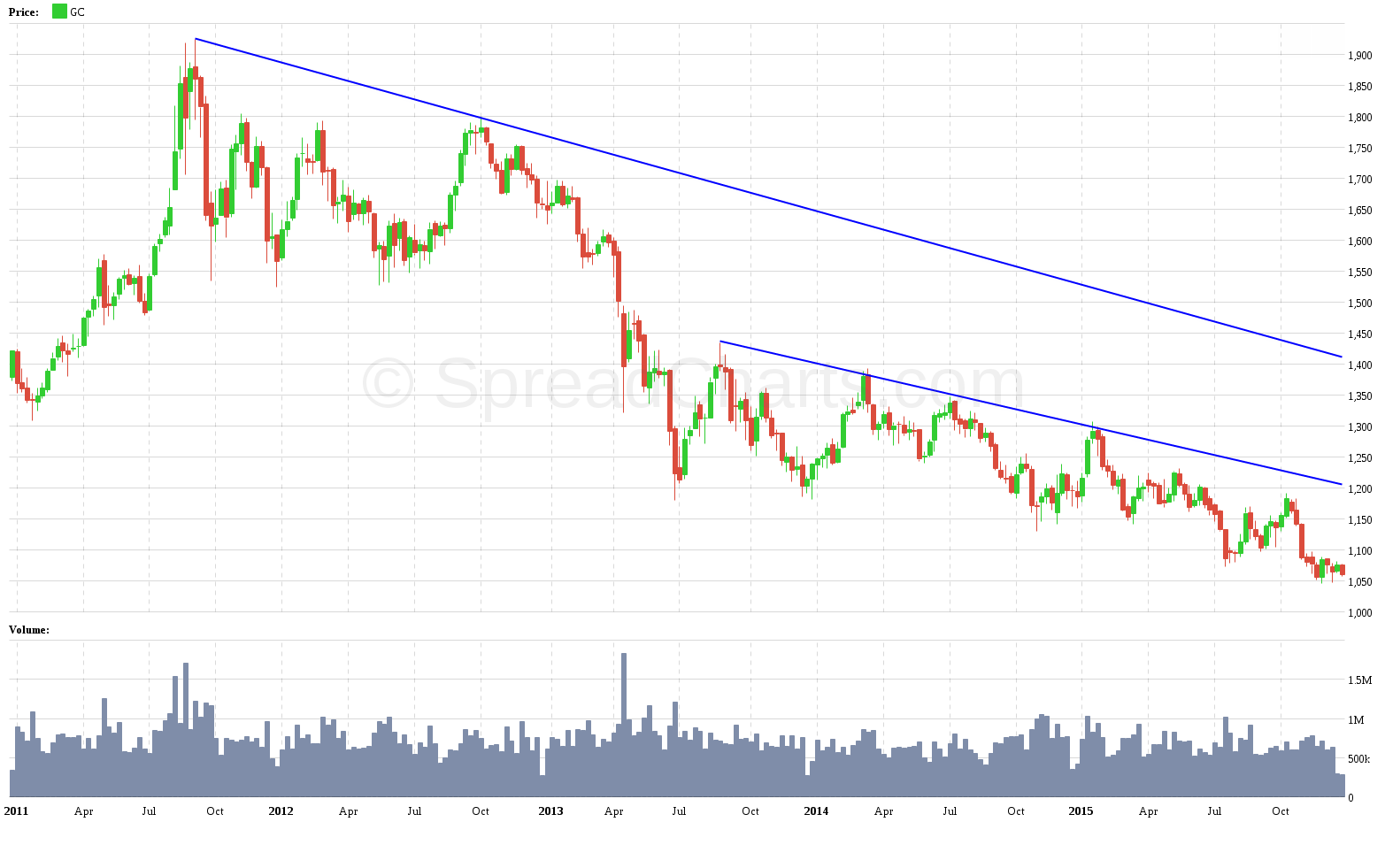 On these resists, the price will probably be confronted with the harsh reality that the gold market is in a strong downward trend. So I expect the price to eventually test strong psychological support at $1000 sometime in 2016.

But what could happen even more in the future? Can we expect a trend reversal in 2016 on gold? Before answering this question, let’s recap the facts. The bear market in gold has been going on for a long time. This is the second longest correction in modern history. It’s beautifully demonstrated by the following chart whose author is Tiho Brkan from Hong Kong: 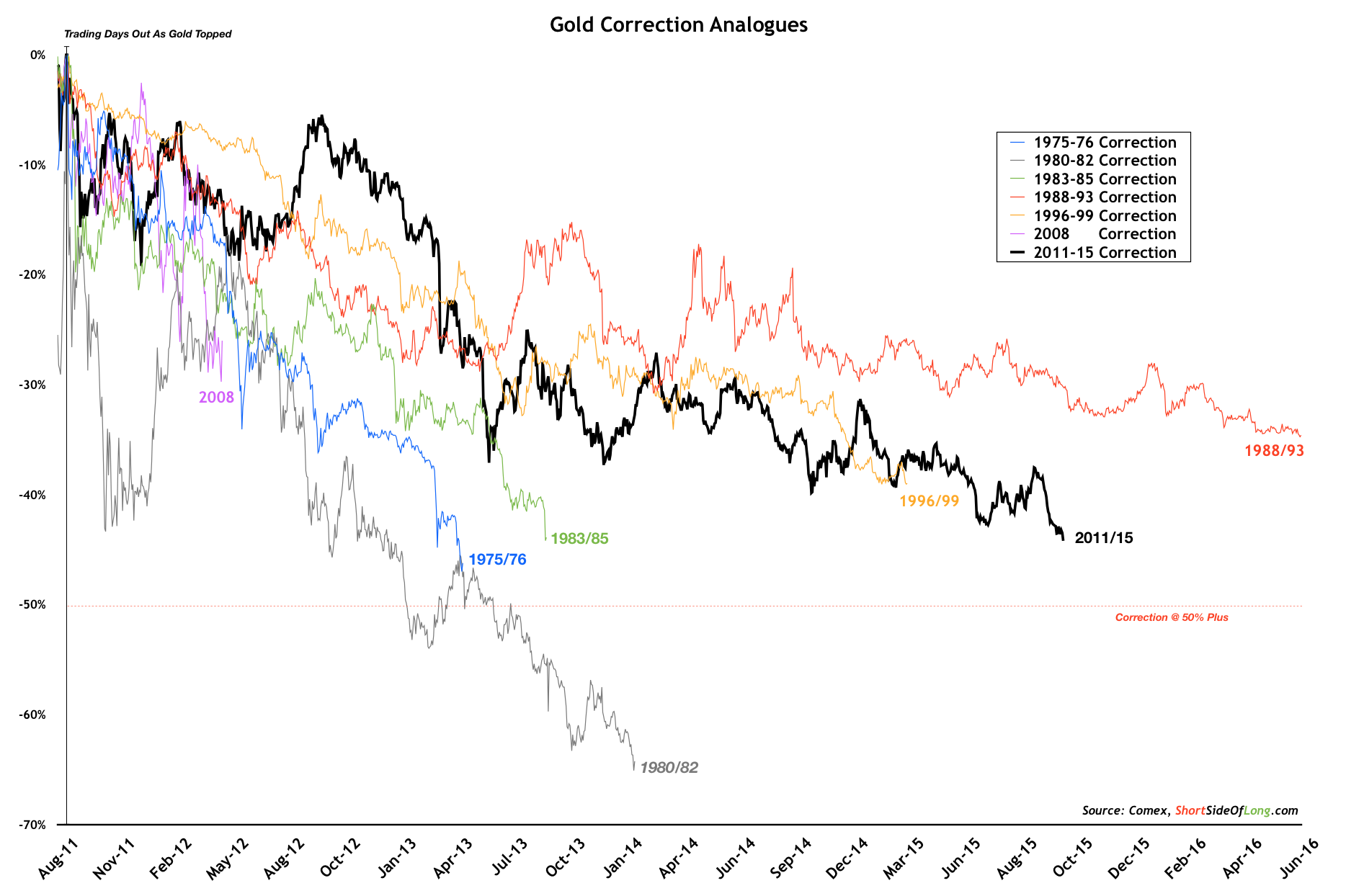 Intermarket analysis is favorable for gold. The ratio between the price of gold and silver (known as the gold/silver ratio) is approaching the region of 80 – 85, where precious metals as a whole tended to reverse the trend in the past. 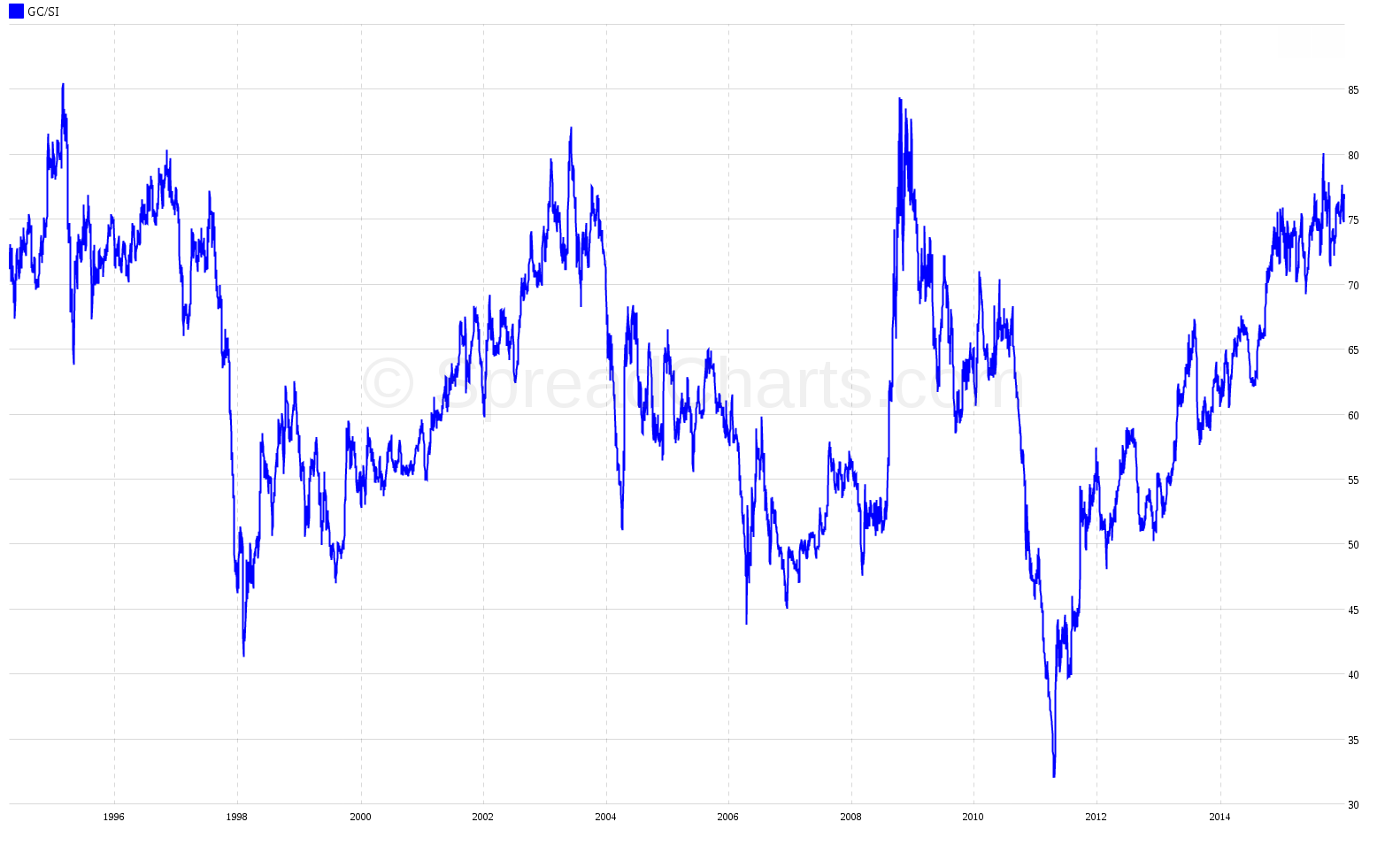 On the other hand, the ratio between the price of gold and oil (GC/CL ratio) shows that gold is relatively expensive to oil. But I would be cautious about making any conclusions here. The oil market is under severe pressure due to unique fundamental factors. Therefore, one can’t say that gold is expensive. Rather, gold is cheap, but oil is significantly cheaper. 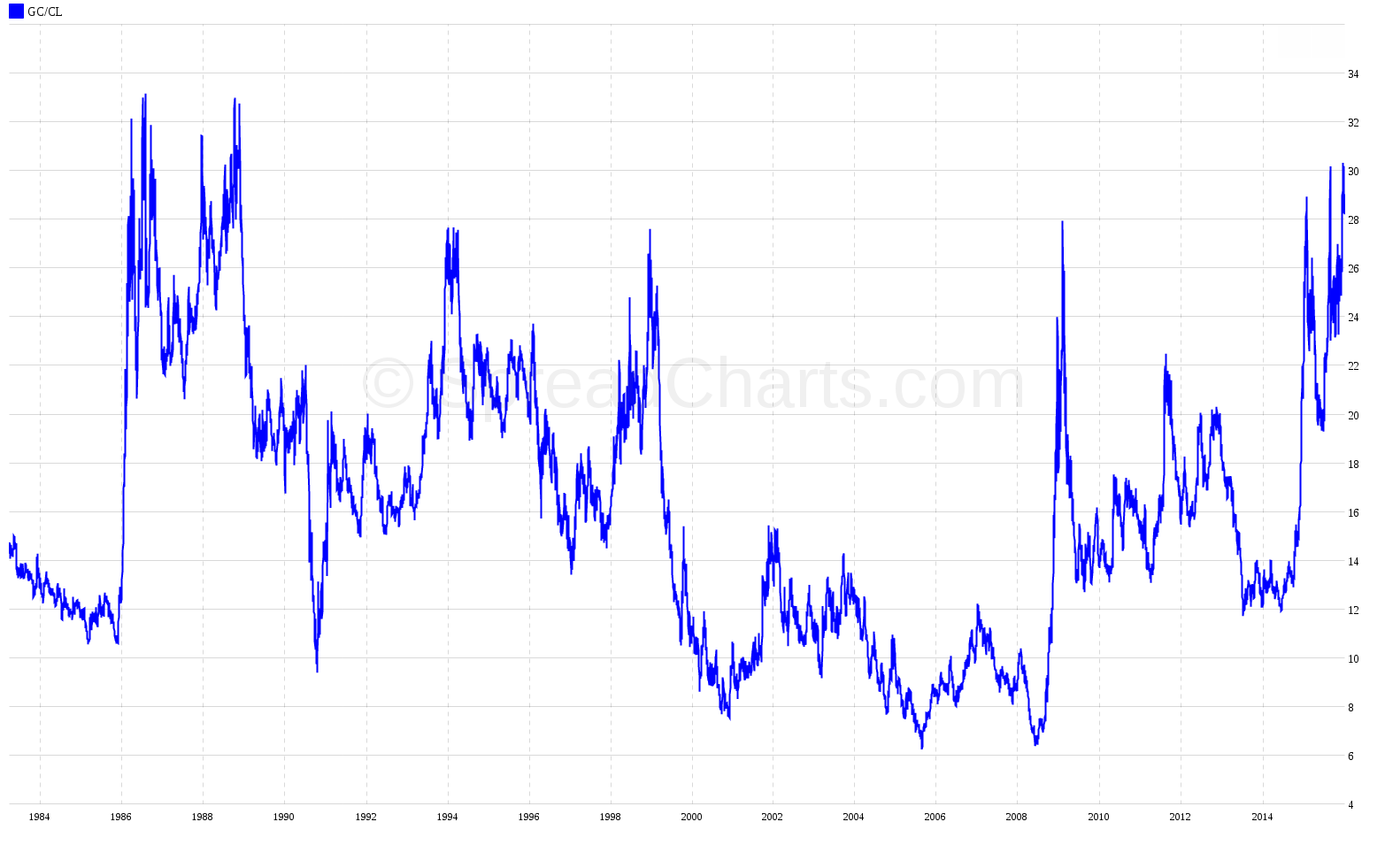 So when I go back to the original question, what happens if the price will test support at $1000 later in the year? One can only speculate here. I would personally wait to make a final conclusion. The price can break through the $1000 for a short period of time, but the key for me is if it can hold above this critical support on a monthly basis. If not, then we can expect the bear market to continue for some time. How would gold behave then is anyone’s guess. There aren’t many clues below $1000. Another important support level is at $700. And just as I said last year, it’s not impossible that gold will trade at such prices. Thus, in the long term, it is still true that gold is in a strong bear market. Until I get a clear signal of a trend reversal, I’ll stick with this scenario. 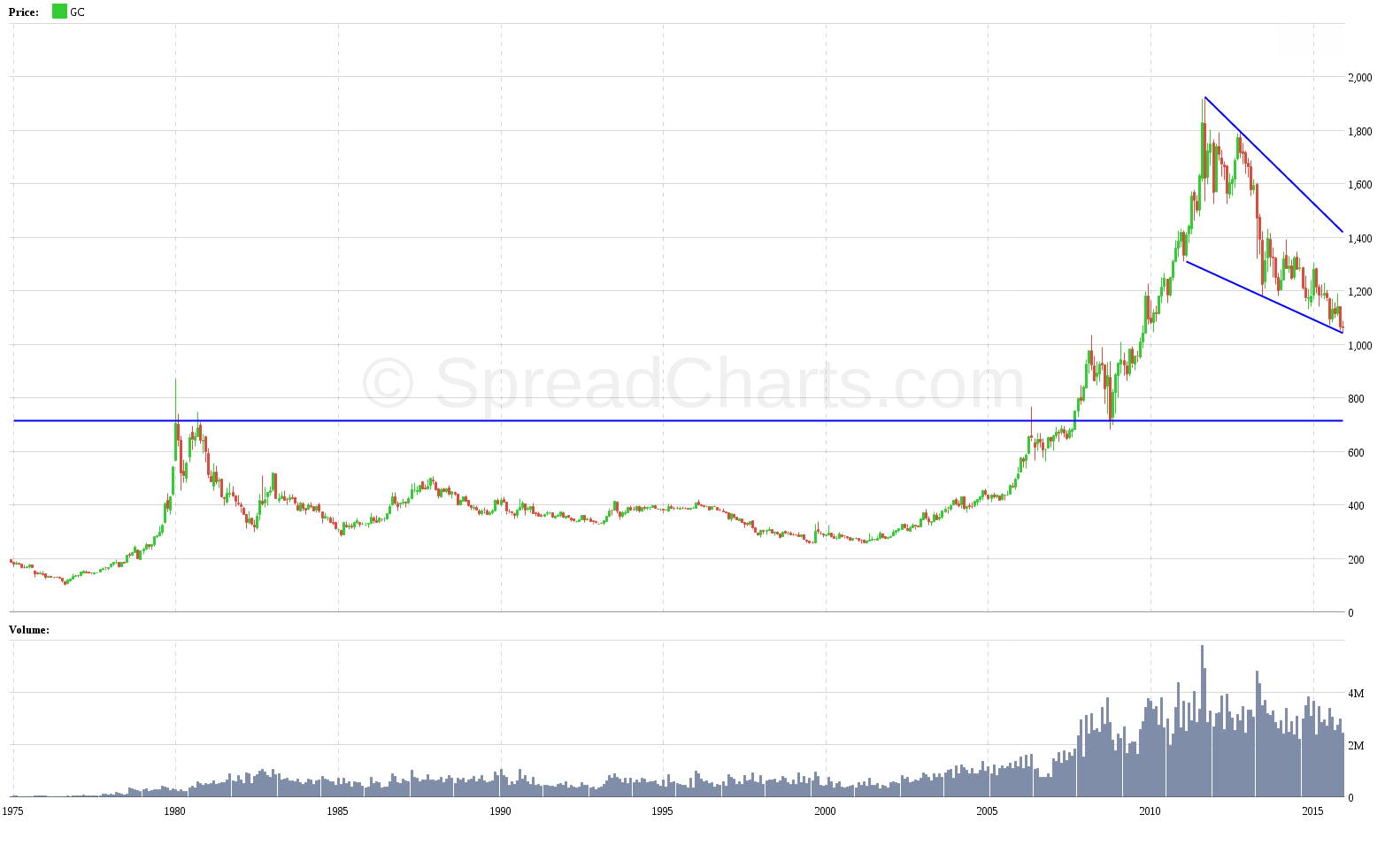 However, such long-term prophecies shouldn’t be relevant for a trader. He should stick to the facts and they point to the rising price of gold at the beginning of the year. One can make a profit, for instance, by utilizing my options strategy on GLD that I’ll discuss later this year.