Is there anything exciting about interest rates? They are boring and trade through complex derivatives that are hard to understand.

While I’m no expert on rates, I know enough to understand it’s absolutely critical to be familiar with at least the basics.

Why? Well, because the rates are not just one among many factors affecting the markets. They are THE most important factor. Interest rates determine the value of money, affecting everything from stocks, bonds to commodities.

Here is the proof. The chart below compares the price of the S&P 500 with the expected Fed Funds rate at the end of 2022. At the beginning of this year, the market expected the rate would finish the year below 1%. It couldn’t be more wrong. The Fed raised rates many times this year, and current market expectations are the Fed Funds rate will finish the year well above 4%. 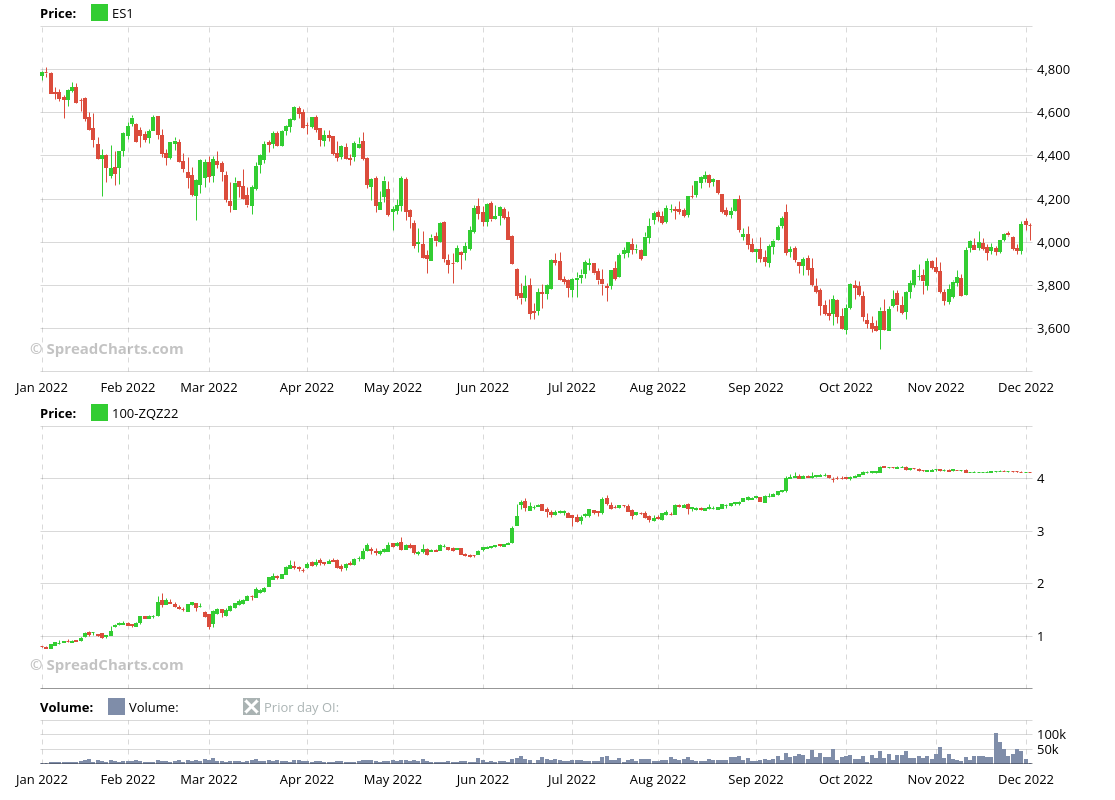 That’s a huge mismatch between expectations and reality. It is not a coincidence that we have a bear market in stocks. The rise in interest rates sucked liquidity from the market and made money more expensive. Suddenly, all these unprofitable companies have a hard time sustaining their inflated business as they used to.

But today, I want to talk about the Eurodollar market. That’s NOT the exchange rate between Euro and Dollar. I have the Eurodollar interest rate futures market in mind (ticker GE). It’s the 3-month interest rate on Dollars outside of the US banking system, for example, in European banks.

That is not just some niche market. In fact, Eurodollar is the most liquid futures market worldwide. Nothing comes close, not even S&P 500 futures or commodities like crude oil. That should not surprise you if you consider trillions of dollars of loans around the world hedged with Eurodollar futures.

On SpreadCharts, we often follow the Eurodollar interdelivery spreads, like the one below. It can be an incredibly helpful tool for timing US recessions. We thoroughly explained it in one of our macro outlook videos for users of the premium version of SpreadCharts earlier this year. 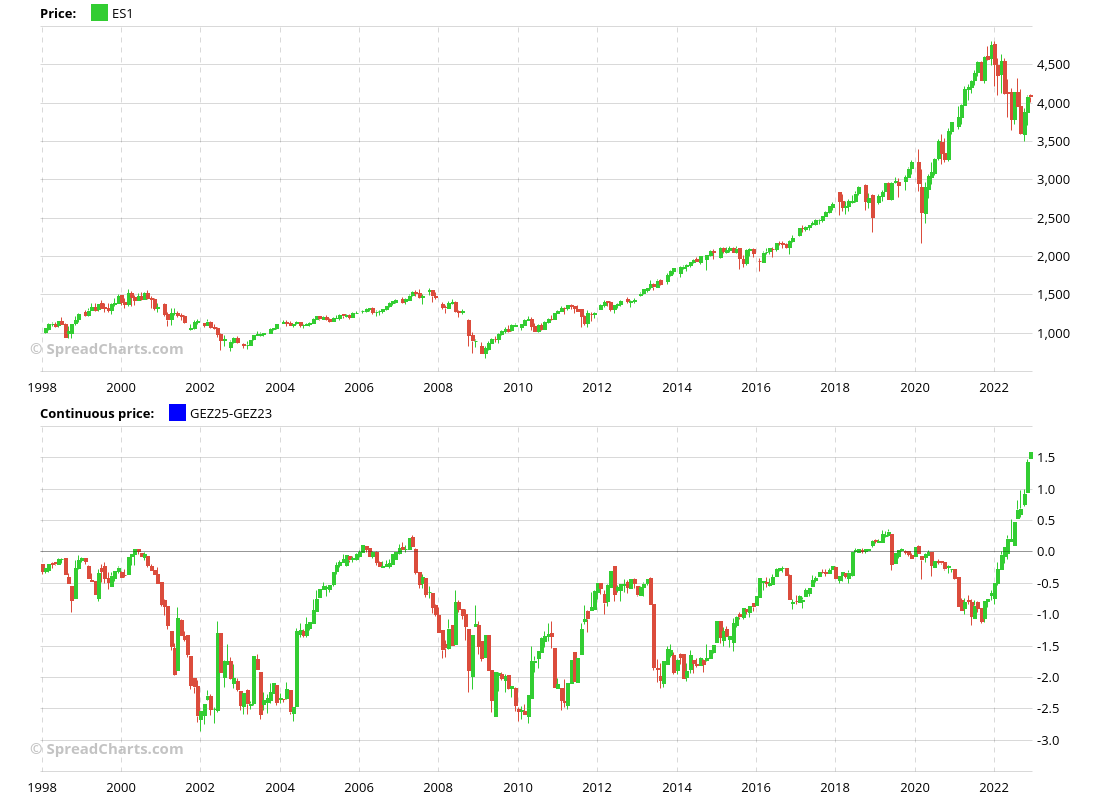 Now that you’re familiar with the importance of the Eurodollar market, you will understand the groundbreaking change that is about to happen.

The underlying for Eurodollar futures is the 3-month USD LIBOR rate. LIBOR stands for London Inter-Bank Offered Rate. All LIBOR rates are set by a number of banks that send their quotes to ICE Benchmark Administration (IBA), a subsidiary of Intercontinental Exchange. These quotes should reflect the rates at which banks are willing to lend to each other. IBA then calculates a trimmed average for each rate and publishes the effective rate for each currency and maturity.

The problem is that LIBOR rates are not set by the market. That makes them prone to manipulation. Such schemes were revealed by regulators in the aftermath of the financial crisis in 2008. After numerous fines, it was decided LIBOR would be terminated.

Publishing of many LIBOR rates has already ceased, and the remaining LIBOR rates will be discontinued at the end of June 2023. That includes the 3-month USD LIBOR rate, which serves as the underlying for Eurodollar futures.

There was a need for the replacement of the LIBOR. It was decided it would be SOFR, which stands for Secured Overnight Funding Rate. Unlike LIBOR, SOFR is market-based, which makes it less prone to manipulation.

The second main difference is that SOFR is a secured rate. As its name implies, SOFR measures the cost of borrowing US dollars overnight using Treasuries as collateral. That can have unintended consequences when, for example, there is a lack of that particular collateral. But I want to avoid delving into details.

CME Group launched 1-month (ticker SR1) and 3-month (ticker SR3) SOFR futures in 2018. Lately, the liquidity of these contracts has exploded as everyone expects SOFR to take over LIBOR rates.

The crucial thing is that 3-month SOFR futures will replace Eurodollar futures. But what are the practical implications for you as a trader? As I said, the remaining USD LIBOR rates will cease to be published after June 30, 2023.

CME Group set April 14, 2023, as the conversion date. April, May, and June Eurodollar futures will continue to trade normally until their expiration.

However, all Eurodollar futures expiring past June will be converted into the same expirations in 3-month SOFR futures on April 14, 2023. The conversion will happen on a 1:1 basis, plus a price adjustment of 26.161 bps. The exact formula is:

The existence of a predetermined conversion date that is known to all market participants has funny consequences. For example, here’s the Eurodollar-SOFR spread for December 2022 (top) and December 2023 (bottom) contracts. 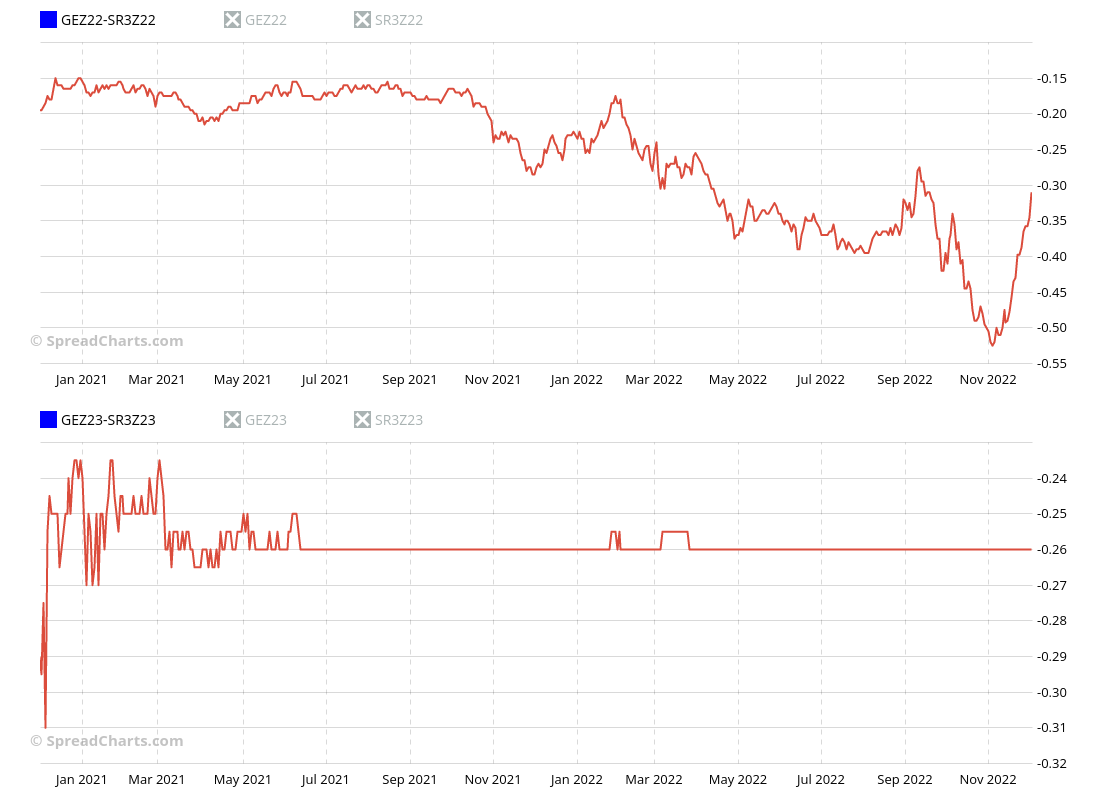 SpreadCharts users won’t be left behind. We added data for both 1-month and 3-month SOFR futures since their inception into the SpreadCharts app today. 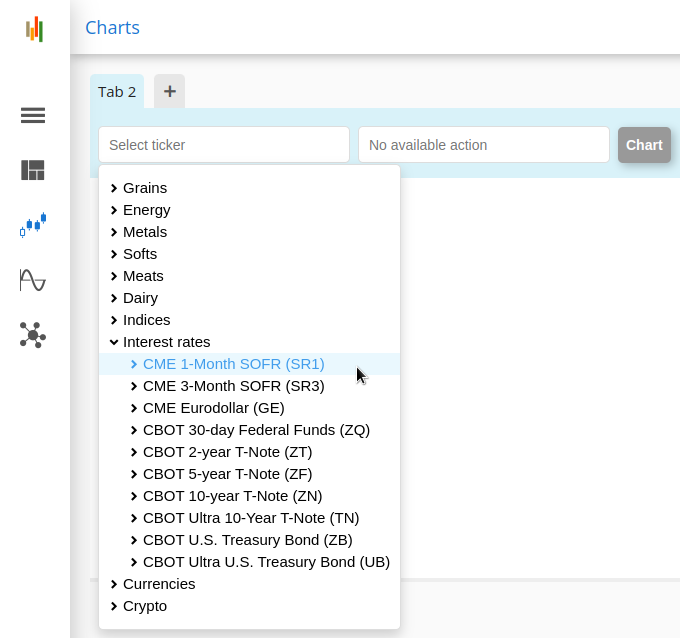 And of course, we have Commitments of Traders data for both SOFR futures.

For example, you can track the SOFR / Fed Funds spread of equivalent duration on the continuous chart below. 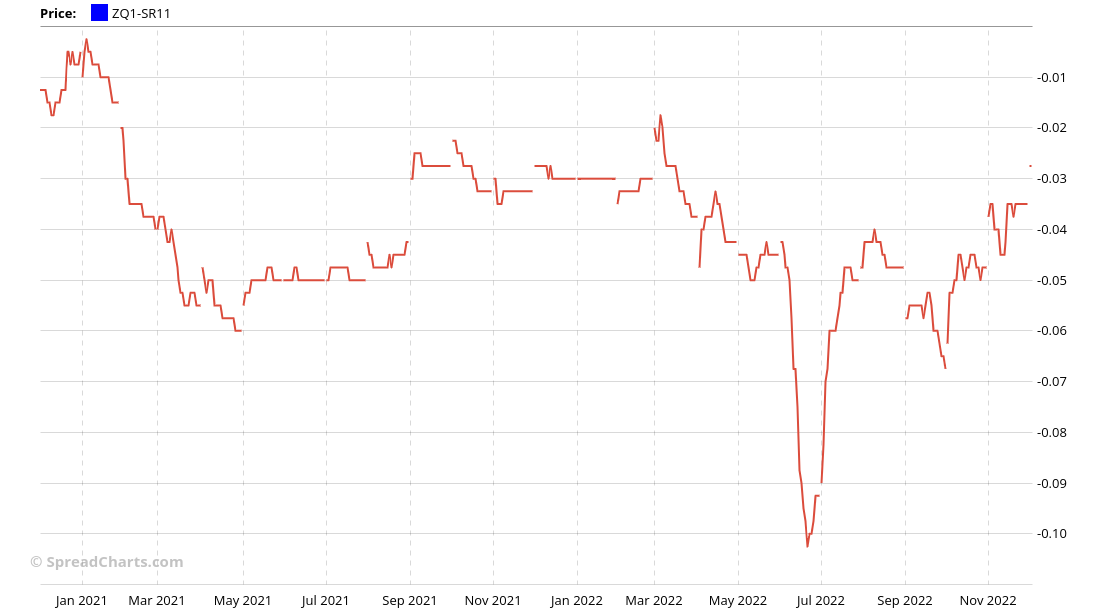 Or 1-month / 3-month SOFR spreads across the curve (below) and explore its impact on other markets such as currencies. 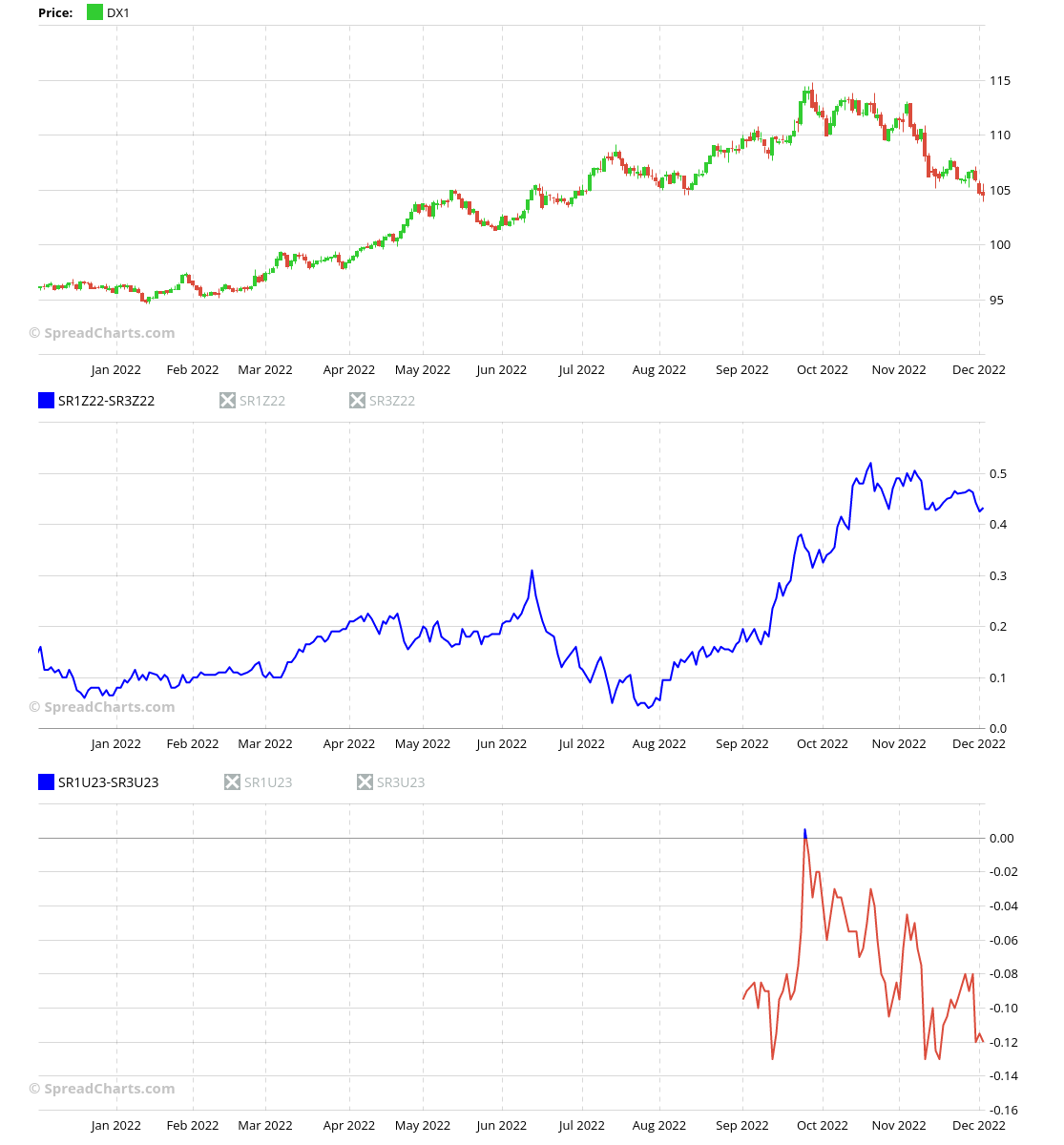 The possibilities are endless with SpreadCharts analytics.